Carl Horst Hahn was born into a family of industrialists linked to the early stages of automobile manufacturing. Dating from 1922 his father played a major role in developing DKW toward the world’s leading motorcycle factory. In 1932 Carl Hahn Sr. helped to found the firm of Auto Union by merging the Audi, Wanderer, Horch and DKW brands. 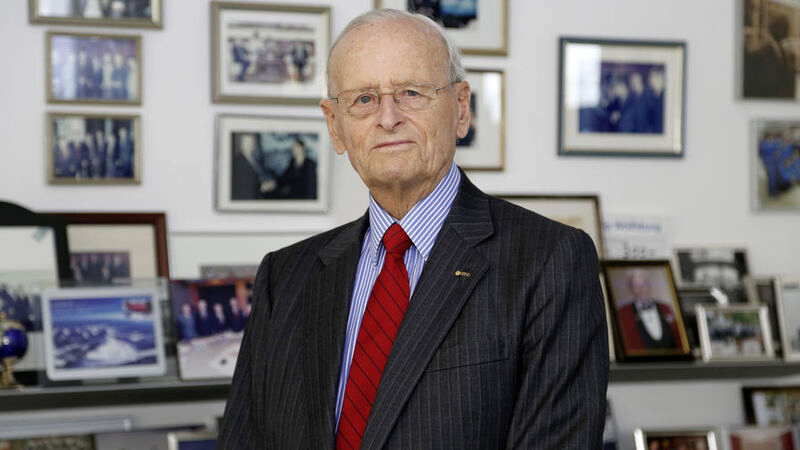 In my office in the Wolfsburg Museum of Art

There followed a year at the OECD in Paris as Administrateur of the European Productivity Agency before he moved to Volkswagen in Wolfsburg in 1954, where Hahn initially occupied the position of assistant to the legendary VW CEO Heinrich Nordhoff. Five years later he was appointed CEO of Volkswagen of America, where he accomplished the triumph of the VW Beetle. He was also responsible for the development and success of Volkswagen in North America. In recognition of this achievement he was called to join the Volkswagen Executive Board in 1964 at the age of 38.

Nine years later, in 1973, Hahn took over the post of CEO of Continental-Gummi-Werke in Hanover – his departure from VW being prompted by disagreements over strategy. During his management at Continental he succeeded in turning this tyre company into a leading global supplier of tyres and technical rubber products. Today, Continental AG figures among the world’s three biggest automotive suppliers.

In 1982 Hahn followed the call from Volkswagen back to Wolfsburg, where he worked as Chief Executive until his retirement in 1992. His renewed appointment took place on precisely the same grounds which had led to his dismissal from VW nine years earlier. During this time his name is linked with the successful models which came after the Beetle and the rise of Audi. He turned a company in decline into Europe’s most dynamic automotive manufacturer.

He is regarded as one of the progenitors of the Golf generation and of a successful divisionalization policy. By way of his strategic decisions, Hahn set the course for the rise of Volkswagen to the status of a global player. New production sites in China, Spain, Portugal and, after the fall of the Iron Curtain, in the Czech Republic, Slovakia, Poland and Hungary, which were established within the framework of his globalization policy, created the foundation upon which the Volkswagen Group became what it is today – one of the world’s biggest automobile manufacturers. In the cases of China and Central Europe, Hahn may be considered a pioneer, being years ahead of the competition. Furthermore, after 1989, VW became the largest investor in the former East Germany, where he breathed new life into the decayed production facilities of the automotive industry in Zwickau and Chemnitz. In addition, during Hahn’s period as CEO, important cooperation contracts were concluded with Ford in South America and Portugal, with Toyota for pick-up vehicles in Europe and with Suzuki in the small-car segment.

Among Volkswagen’s many accomplishments during this period is the fact that in 1985 the VW group exceeded the 50 billion DM barrier for the first time. Its purchase of the Spanish SEAT marque a year later enabled the Volkswagen Group to expand its European basis and advance to the status of market leader in Europe. In 1990 VW invested in the Skoda Works in the Czech Republic, making Skoda the fourth brand in the Group’s portfolio, alongside VW, Audi and Seat. At the end of 1992, Hahn handed over his office as Group CEO to the former Audi chief, Ferdinand Piech and moved to the company’s Supervisory Board where he remained until June 1997.

Among Hahn’s many activities after leaving Volkswagen was his chairmanship of the Board of Directors of the Swiss engineering group Saurer AG, where he operated from 1993 to 1996. He is Vice-Chairman of the Supervisory Board of Reykjavik Geothermal Ltd., a pioneering company in the field of power production from geothermal energy. In addition, Hahn served as a member on the supervisory boards of numerous European and American companies, including Bata, Benetton, British Petroleum, Commerzbank, DAF, Gerling, Paccar, ThyssenKrupp, TRW and Perot Systems. He was distinguished as one of “Corporate America’s Outstanding Directors” in the USA in 1999. Hahn is Honorary Chairman of the Supervisory Board of the Group brands Audi, Seat and Skoda. Hahn is also an honorary professor at the Westsächsische Hochschule Zwickau University of Applied Sciences and at the Kyrgyz State University of Construction, Transportation and Architecture (Faculty of Software Engineering), Bishkek, Kyrgyzstan, as well as being a member of the Board of the Lauder Institute at Wharton School/University of Pennsylvania, the International Advisory Committee of the Salk Institute, California, the Instituto de Empresa, Madrid, the Instituto Internacional San Telmo, Seville, and the International Conference on Genomics, Shenzhen (China). He was an economic advisor to Askar Akaev, President of Kyrgyzstan from 1996 to 2005.

Hahn was the initiator of the Museum of Fine Arts in Wolfsburg and is a member of its Board of Trustees. He is also active in numerous political, cultural and social organizations including being a member of the Board of Trustees of the Antonius Holling Foundation, the Executive Board of the Mayo Clinic Foundation in Germany and the Board of Trustees of the Volksbank BraWo Foundation. He also sits on the Advisory Board of the Saxony International School – Carl Hahn, Glauchau, and is a member of the Berlin British School. In addition, recent years have seen Hahn acting as patron for a number of organizations, lending his support to different concerns. In 2006 he founded the Carl H. Hahn Family Foundation which was renamed the Carl and Marisa Hahn Foundation in remembrance of the founder, Marisa Hahn, who died in June 2013.July 2016 saw the establishment of the Carl Hahn Scholarship, the purpose of which is to give outstanding young people from the catchment area of Volkswagen Wolfsburg the opportunity to study in the fields of business/economics or technology.

Ten universities in Germany and other countries have awarded him honorary academic degrees. Austria, Belgium, Brazil, Italy, Spain, South Africa, Kyrgyzstan, Czech Republic, the Slovak Republic and and the Federal Republic of Germany as well as the States of Lower Saxony and Saxony have awarded him medals of honor. He is also an honorary citizen of Wolfsburg, Chemnitz, Zwickau and Changchun in China.

Hahn published his memoirs entitled “Meine Jahre mit Volkswagen” (“My Years with Volkswagen”) in 2005, which was also published in the People’s Republic of China in 2007. Russian and Czech-Slovak versions have also been published. 2016 saw Hahn – with co-author Peter Kirchberg – publish the book entitled “DKW-Hahn”. This is a reminiscence of his father, who played a major role in DKW’s rise to become the world’s biggest motorcycle producer, and in 1932 was one of the co-founders of Auto Union which, after World War II, became what is today Audi AG in Ingolstadt. In addition, Hahn has also published the thesis “Der Schuman-Plan – Eine Untersuchung im besonderen Hinblick auf die deutsch-französische Stahlindustrie” (“The Schuman Plan especially in view of the Franco-German Steel Industry”) (1953) as well as numerous articles and essays in books and other publications including “International Capital Flows” by Martin Feldstein and “Jahrgang 1926/27 – Erinnerungen an die Jahre unter dem Hakenkreuz”, (“1926/27 – Memories of the Years under the Swastika”), published by Alfred Neven DuMont, in “Focus on Evidence – Fremdsprachendidaktik trifft Neurowissenschaften” (Foreign Language Teaching Meets Neurosciences) published by Heiner Böttger/Michaela Sambanis, and in “Ugly Is Only Skin-Deep – The Story of the Ads That Changed the World” by Dominik Imseng.

In 2006, Hahn was inducted into the European Automotive Hall of Fame

Hahn’s wealth of international experience makes him a sought-after speaker at conferences, both in Germany and other countries.

His marriage to his American wife Marisa, née Traina, (who died in 2013) produced four children and nine grandchildren.