The English, German, Chinese, Czech and Russian version of “My years at Volkswagen” for your digital device.

Download the EPUB onto your EBook Reader or send the MOBI file to your Kindle email. For the best reading experience of the PDF, download the PDF and set to View – Page Display – Two Page View.

My years at Volkswagen EPUB

My years at Volkswagen MOBI (Kindle) 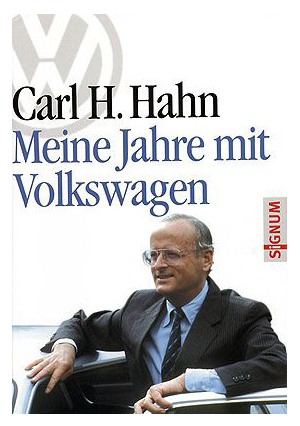 Hahn devoted his professional life to the automotive industry and, for half a century played a decisive role in the shaping of Volkswagen’s development. Under his guidance the company grew into Europe’s biggest automobile corporation, globally positioned for the world of the 21st century. His book entitled “Meine Jahre mit Volkswagen”(“My Years at Volkswagen”) is thus more than an autobiography, more than a collection of memoirs.

The book provides the millions of automobile fans – especially, of course, those of Volkswagen, Audi, Seat and Skoda – with a wealth of historical details on these leading brands. At the same time it recounts an exemplary policy of globalization and divisionalization which made Volkswagen Group the key economic factor in many countries and created tens of thousands of jobs at national and international levels. There were many other companies too, for which this policy opened up new opportunities in the global markets.

The book is a unique source of information for everyone interested in economic backgrounds in general and in particular in the automobile industry – and is also interesting for the general public. 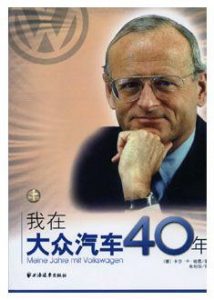 December 2007 saw Carl H. Hahn’s memoirs published in the People’s Republic of China. The official book launch took place in the presence of the author and attracted wide and positive press coverage. In addition, Russian and Czech-Slovak editions of the memoirs have been published. 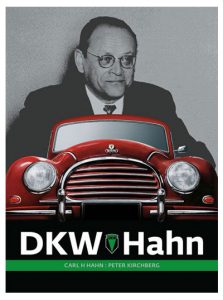 On the occasion of his 90th birthday, Carl H. Hahn junior – in collaboration with Peter Kirchberg – published a book entitled “DKW­ Hahn” about his father who had gained fame as the “motor” of DKW. Based in Zschopau/Germany, the company advanced in the 1920s to become the world’s biggest motorcycle producer. Hahn senior was one of the co-founders of Auto Union, which was formed from the amalgamation of Audi, Wanderer, Horch and DKW in 1932 in the wake of the world economic crisis. 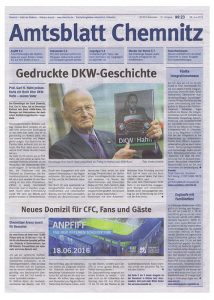 In founding DKW Auto Union in Ingolstadt after World War II, Hahn senior – together with Richard Bruhn – laid the foundations for what today is Audi AG and for the ascent of Ingolstadt to become one of Germany’s most prosperous cities. The industrial activities of Hahn senior are not limited to the automotive industry alone, however. The development of the “o.b.” tampon made him the creator of what became and today remains a world-renowned product.

“DKW-Hahn” not only provides an insight into a key part of the automotive history of the 20th century but also makes a case for the enduring relevance of human values, for cohesion in the family and the maintaining of its roots. The book also pays tribute to the achievements of the people of Saxony.